In recent times the Bolognesi have profited by the influx of tourists, ready to part with their dollars or yen while enjoying the holy sights such as the Seven Chapels of the church of Santo Stefano or Lucio Dalla’s home in Piazza dei Celestini. These visitors, primed by travel articles in newspapers and by word of mouth, arrive ready to partake of the famed gelati and tortellini. Under the Two Towers many former shops have morphed into fast food 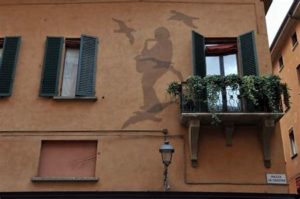 emporia or hand-made pasta factories. Years ago the only ice cream store was da Pino in Via Castiglione. Now they seem to be on every corner and they all seem to prosper. 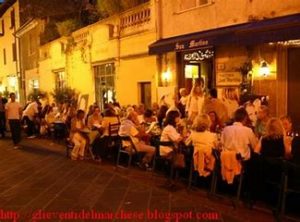 Perhaps the most potent generator of cash, however, is the “wine bar” – a rather recent concept which has spread exponentially throughout the city. These require a small capital investment but can yield big profits in a hurry.  An enterprising local can rent a small storefront, outfit it outside and in with some cheap garden furniture and buy a few cases of plunk to sell at about 5 Euro per glass. A small microwave can produce some pricey canapes to increase one’s thirst and make the cash register ring. The principal requisite is that the bar open after sundown and that it remain open until first light. Many patrons prefer 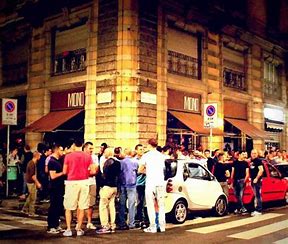 the outdoor seating because smoking is permitted – yes, even in the winter. It takes little imagination to realize that after a few bottles of wine the patrons tend to get noisy and sometimes belligerent. Lord help the neighbors who, having bought their homes years ago on what used to be a quiet street, now discover that they live in the heart of a movida. Zoning laws in Bologna are curious. One can for example, find several bars, banks or opticians’ shops all jammed shoulder-to-shoulder on the same block.

Since Bologna’s city center is largely unchanged since the Middle Ages the streets are little more than alleyways. Parking is at a premium. This is of little importance to the bands of tourists milling about during the day. After dark, however, the local nocturnal revelers appear, ready to chill out. They often ride motorcycles, unencumbered by mufflers. The sidewalks become their parking lot. There is a passion for showing off expensive automobiles, too – Land Rovers and Porsches, flagrantly parked in 24-hour tow-away zones, seldom get the attention of the police. Even the white striped pedestrian crossings are ideal for leaving a car while the driver goes to enjoy himself in a bar. The pedestrians must wander into traffic to cross the intersection. I do wonder about the extent of driving while intoxicated, too. Most night bar patrons do not use public transportation and seem reluctant to travel anywhere on foot, unless in rowdy groups. 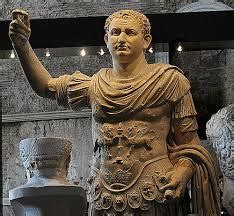 The call of nature is difficult to ignore after several glasses of wine or beer. The number of public bathrooms is quite limited, though bars are required to have a facility available for their clientele. The result is public urination on a grand scale – so much so that the city provides disinfectant spray trucks to ride around at dawn hosing down the night’s effluvia deposited on alley walls, in stairwells and near trash bins. It’s hard to say which smells worse – the urine or the disinfectant.

city fathers not long ago did away with the classic outdoor urinals – vespasiani (named for the emperor in the picture)– but offered few options to distressed drinkers. Some cities, for example, Venice, have many bathrooms which are clearly indicated by street signs. Evidently it is less expensive in Bologna to spray the streets than to build public toilets. One street near Piazza Santo Stefano is so malodorous that it has been unofficially renamed “Cesspool Street,” (Via dei Cessi) even though it leads to a picturesque enclave of luxurious homes. At sunrise each day it reeks with the cloying smell of spray disinfectant. 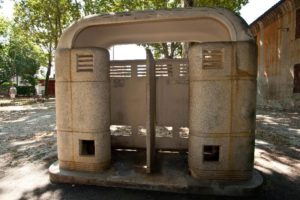 In the past one was able to via find free bathrooms not only at the railroad station but also in the pedestrian underpass below Via Rizzoli, the main street. With the emergence of street crime the underpass had to be closed, depriving the night partygoers of yet another place to relieve themselves.  The railroad station facility now requires payment of almost a Euro to use it. Many people without change or means must wander out into the streets to find a suitable place in the darkness. 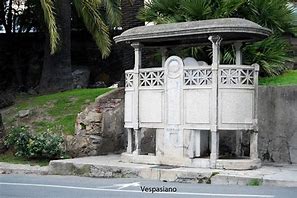 In Rome and Florence it is now not that unusual to see groups of men even in full daylight standing facing the walls of buildings, completely undaunted by the passage of families or groups of tourists. Apparently this is becoming a global phenomenon. A similar disregard for public hygiene now plagues San Francisco and Los Angeles, according to news reports. I suspect that the city of Bologna could raise enough cash to finance a more serious public hygiene project just by ticketing or towing the numerous vehicles parked illegally every night near the