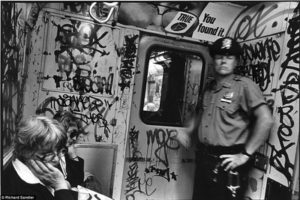 The emergence of graffiti as part of the decline of inner cities exploded in the United States about fifty years ago, when rival street gang members scribbled on walls of buildings to mark their territory. The roots of graffiti can be traced back to ancient times, as in Pompey or Egypt. Today’s variety largely expresses an anti-establishment sentiment by young people with too much time on their hands and a perverse wish to disfigure the face of their city. Many Bolognese youths fall prey to the appeal of being a “writer.” They come out after dark like rats, armed with a can of spray paint, keeping in the shadows. Nothing is more appetizing to them than a fresh, unsullied wall not easily noticed by passers by. Homeowners and shopkeepers who have once been victims seldom bother to repaint the walls, knowing that doing so will only make new writings appear again like magic overnight. 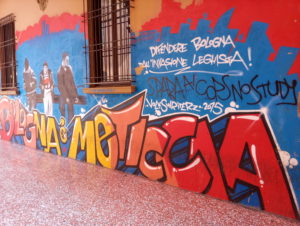 Every now and then you can find works by street “artists” which are interesting or maybe even attractive, for example in Via Zamboni where students outdo themselves in creating images, always heavily political in nature, of a certain degree of talent. The compound of LABAS (a group of left-wing activists) in Via Orfeo is decorated extensively with imaginative cartoons.

A particularly unhappy example of the lack of respect for the past can be found in lower Via Zamboni at the birthplace of the venerable Monsignor Francesco Masotti, who was a respected Bolognese clergyman and pride of the ecclesiastical community around the turn of the century. His commemorative plaque so far has miraculously escaped defacement but seems lost in a sea of crazy scribblings. His memory certainly doesn’t deserve such treatment! 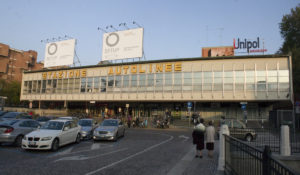 The wall of the city bus station exposed to traffic on Viale Masini was defaced for over thirty meters during a parade of political activists some months back. Obscene artwork and unrepeatable phrases greeted all visitors arriving from the railroad station down the street. I am happy to report that in less than a week after I reported this vandalism to the Bologna Office of Public Relations the entire wall was repainted and no longer is an offensive eyesore. Kudos to the city officials for this action!  It appears as well that groups of concerned citizens are forming groups of volunteers to paint over objectionable designs in the city. Things are indeed looking up.